Capturing new inspiration from his own creative process, and undoubtedly  influenced by exposure to the works of diverse world-class choreographers during  his ongoing global career, Liang (b.1975) brings both sensitivity and daring to OZ, via hi-tech choreography and staging details, while honoring classical technique with ontemporary complexity.

From Ballet to Broadway

The million-dollar, full-length production is a collaboration between Tulsa Ballet and BalletMet —  the crown jewel of new work presented during Tulsa Ballet’s 60th Anniversary season. Underwriting sponsor is Mollie Williford.

Stoica was recently promoted to the rank of principal dancer with 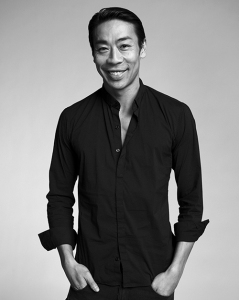 The Taipei, Taiwan native, Liang, who was raised in Marin County, California during his youth, before advancing his studies in New York City and beyond, brings a distinctive synergy and sensitivity to his works, which include  his masterful Romeo and Juliet, performed by Tulsa Ballet in recent years

A former dancer with New York City Ballet and Nederlands Dance Theater, Liang now choreographs extensively for major dance companies around the globe, currently serving as BalletMet artistic director. He has bridged the gap between ballet and Broadway years ago, having joined the Tony Award-winning cast of Fosse on Broadway in 2001.

What I observed from watching his Romeo & Juliet, in recent years, was dancer awareness in the capacity to grasp and emanate the essence of human emotion — a skill often lost on hi-tech influenced dancers in this digital age, which often brings a distance and disconnect of human emotion, overshadowed at times with a demonstration of skillful technique, rather than nuance..

Catching up with Liang following the opening night premiere of  Dorothy and the Prince of Oz  last week, I asked him which choreographers have most inspired him in his soaring career, to which he replied: “Christopher Wheeldon is my best friend…I’ve admired his work…Also, having danced with New York City Ballet, the work of  Jerome Robbins (1918-1998) is influential…and also (the Czech choreographer) Jiri Kylian,” whose sophisticated Petite Mort ballet, set to awe-inspiring Mozart music,  has twice been performed by Tulsa Ballet in recent years here, and taken on their highly successful 2016 Italian tour.

The same could be said for Jerome Robbins, whose dynamic works range from the widely familiar diversity of dances he choreographed for West Side Story on Broadway and on film; to his lyrical, breathtaking 1969 Dances at a Gathering, to music by Chopin, for New York City Ballet, — said (per NYCB website) “to distill the spectrum of human interaction into the most natural of movements, –a landmark for its invention, virtuosity, and constantly shifting emotions.”

And the prolific Christopher Wheeldon (b. 1973), the British-born choreographer of contemporary ballet, trained at the Royal Ballet School, later serving as artistic director for The Royal Ballet. Wheeldon won a Tony Award for his work on the hit Broadway show An American in Paris.

According to CBS News, Wheeldon has created more than 90 ballets, from ballet to Broadway. Via 60 Minutes,  April 3, 2016, correspondant Lesley Stahl says he is “…one of the most celebrated choreographers in the world today; turning the tradition-bound dance form into something athletic, sensual and edgy.”  So, too, Liang.

Now Liang brings the synergy of such influences, and his own design, to the splendor of a contemporary ‘OZ’ spectacular, which echoes ongoing innovations of contemporary technique while serving as a harbinger of creative spectaculars to come.

The evolution of ballet to Broadway-influenced spectaculars is sure to please, as Tulsa Ballet looks forward to presenting, next February,  the North American premiere of Derek Deane’s Strictly Gershwin, a tribute to George Gershwin and the big band era of the 1920’s and 1930’s.complete with Broadway singers, tappers. and classical notes to savor.