With Adam mastering the keyboard, and Kizzie celebrated  in song, both hot and cool streamlined sounds were featured in a free concert for music lovers of all ages. Adam & Kizzie’s diverse musical themes range from ‘getting on board the freedom train’ to celebrating love — perhaps inspired by their own amazing musical and personal partnership.

According to the trendy couple’s website, adamandkizzie.com, their invigorating and engaging song, Train, performed for OKM Saturday evening,  was recently their #1 song requested on Oklahoma airwaves, and their first and instant hit single, Can I Get a Light, is played daily over worldwide airwaves.

Now joined with Ropeadope Records, the couple has set out on tour to promote their newly released album in the EEDO series, The Book of EEDO, Vol 2.

According to Adam & Kizzie, “EEDO is the essence of frEEDOm — anything good and right…In music, EEDO is a way of synthesizing all of our influences into one unified approach — Freedom…We advocate love, enlightenment and truth.”

A Mesmerizing ‘mix-up’ of Success 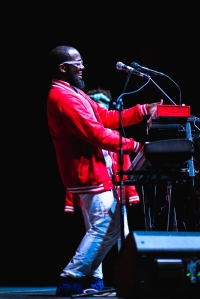 This Oklahoma couple knows how to both “take it back” and “move it forward” with customized arrangements, new songs, and  infectious rhythms that dazzle with heart and soul musical interpretations, venturing beyond the constraints of categories like R & B, soul, jazz, and hip-hop. Adam & Kizzie serve up a mesmerizing ‘mix-up’ of a unique brand of successful, rhythmic styles and personal inspirations.

In introducing a new song Saturday, Kizzie proclaimed that “Love is the most important thing…Do you agree?” Not yet released, the  lyrics for the new melody, as sung by Kizzie, proclaim “If you want love, you gotta grab it, and to keep it, you gotta hold it…and so we need it,” with engaging rhythms and audience participation — “Say Yeah!” and “Say Yay!! to love!!!”

And so, over the years taking their own lyrical advice, Adam & Kizzie have captured love’s essence in now shared personal, and musical lives, and appear to celebrate each other on stage.

“The love songs preceeded our courtship,” says Adam, whose stylish, romantic song, “You Cause My Sun to Shine,” (2011) is dedicated to his wife, Kizzie. Though having met in younger days, each artist’s worldwide career path had taken them in different directions for years, broadening their talent and experience, before they reunited and fell in love.

Adam’s sophisticated, easy-listening new arrangement of Harold Arlen and Johnny Mercer’s “Blues in the Night,” now allows Kizzie to rekindle her fire for singing a timeless classic that she once said she would never sing again.

“For two years I  sang that song five times a day while working for a Disney theme park in Tokyo,” Kizzie explained to the OKM audience. Her fervor for the song later returned, however,  when the gifted musician, Adam, apparently wooed the talented songstress with the sultry, hypnotic qualities of his hauntingly beautiful new arrangement for these blues, also heard Saturday night..  Bravo & Brava!

OKM, Opus 32 continued Sunday with a concert on the main stage at the BCC June 12 — A Musical Voyage from the Americas to Europe: A World of Brilliant Sound, featuring the Tulsa Signature Symphony at TCC, with Andrés Franco conductor.

June 13, A Gala Ballroom Dance at the Hillcrest Country Club  will feature the Signature Symphony Dance Band for the black-tie event.